MY FAVORITE PHOTOS FROM MY WEDDING!

After working with our oh-so-awesome brides/grooms for 10 years, I finally became a bride myself! I. Am. Married! I actually became Mrs. Mayes earlier this year… but we’ve been so busy shooting our #BTLweddings, I fell behind on sharing my OWN wedding with you guys. Last month, I shared Ten of my favorite photos from my wedding, and now it’s time for part two! Choosing just ten favorites was impossible (hence the need for two blog posts). In the spirit of full disclosure, you should probably know that this post actually has more than 10 images… buuuut I used ten images in the first post, so I’m sticking with the same title. 🙂

I mentioned that we’ve been shooting weddings for ten years now. I thought I had a pretty good idea of which wedding images would be my favorite. I knew I’d love the portraits of Jeff and I together… the photos of our wedding party… the shots of our first dance (and I DO love all of those images!) But the images that I love love LOVE are the ones I couldn’t have planned for. The “in between” moments that were exclusive to our wedding (Jeff hugging his dad in the middle of the ceremony aisle before the ceremony began, the funny faces we made when we were first announced as husband and wife, etc.) I’ve included those images and several more below. I hope you love them as much as I do.

#1  – The heart of Castroville
Jeff and I got married in Castroville, Texas… A small town just west of San Antonio. Jeff is a country boy, through and through. He loves fishing, hunting, BBQ, college football (Gig em!), and anything else that small-town America has to offer. I, on the other hand, am a city girl. I was born and raised in the heart of San Antonio. I like air conditioning, HGTV, and I feel most comfortable when I’m within 10 minutes of a Chick-Fil-A and a Target. Even though I’m a city girl, Castroville has always had a special place in my heart.  When I fell in love with a country boy, a small town wedding just felt right. I remember driving out to Castroville with my family as a teenager and thinking “I wanna get married in this town.” This “saloon” is in the heart of Castroville and is an iconic building that everyone in the town knows and loves. I plan to eventually turn this photo into a large canvas gallery wrap somewhere in our house. And someday, I hope to go back to this building with our kids and recreate this photo as a family. 🙂 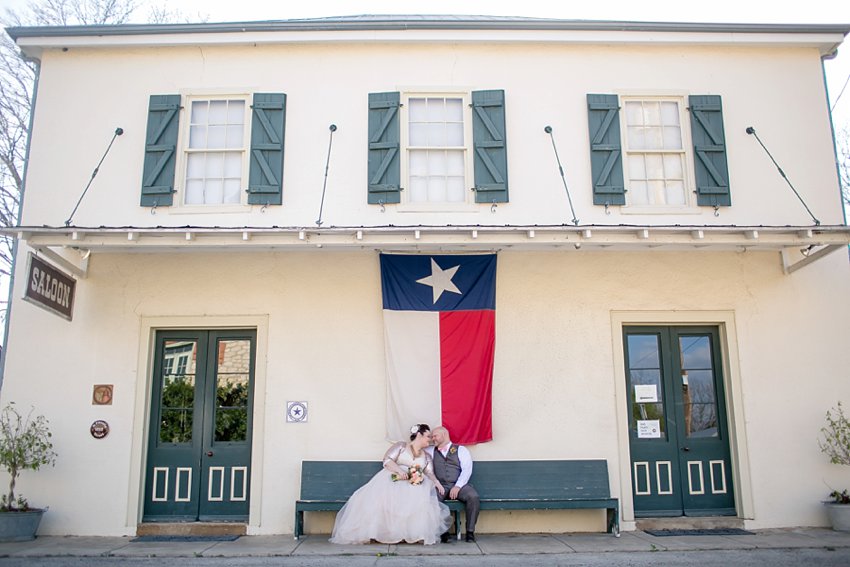 #1  – Our Little White Chapel
If you’ve ever driven through Castroville on Highway 90, you’ve probably noticed the little white chapel on your way out of town. That little chapel is First Baptist Church of Castroville. I was never the girl to plan her wedding way before she met the guy, but for some reason, I’ve always wanted to get married in a little while chapel. Having a church wedding was important to us, and this little church was exactly what I’d always wanted. 🙂

#3  – Our Memory Table
Weddings are funny. They’re super happy days because most of your friends and family are there… but they’re also sad because they usually can’t ALL be there. Jeff and I wanted to pay tribute to our family members that have passed away. The sign in the middle read “We know you’d be here today if Heaven wasn’t so far away.” Jeff’s family members were on the right (his grandparents and Uncle). My family members were on the left (my grandparents and Aunt). We were especially sad about my Grandmother not being able to make it to our wedding (pictured on the left in red). She passed away just three months before our wedding day. She wanted to see Jeff and I get married SO badly… I was the last of her grandchildren to tie the knot, and ours ended up being the only wedding that she missed. 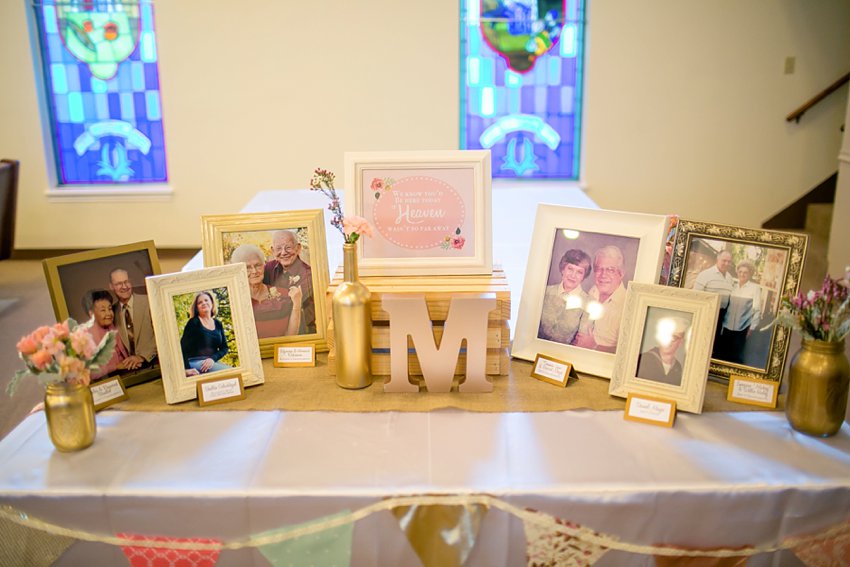 #3  – Jeff’s Dad giving him “away”
This photo is especially meaningful and is framed in our house. Jeff and his dad are best friends. They can talk on the phone for HOURS (I thought my mom and I were bad) They laugh at the same jokes and seem to agree on most everything (except football. They can debate Aggie football All. Day. Long.) Jeff and I waited until we were older to get married. Jeff’s choice to finally settle down was kiiiiind of a big deal. On one hand, his parents were excited (they’ve been begging him for grandchildren for years!) On the other hand, getting married was a huge change. It was an emotional day. When Jeff entered the ceremony, his dad gave him the biggest/longest hug. I am soooo glad that this moment was captured. It was one of the sweetest moments of our day. 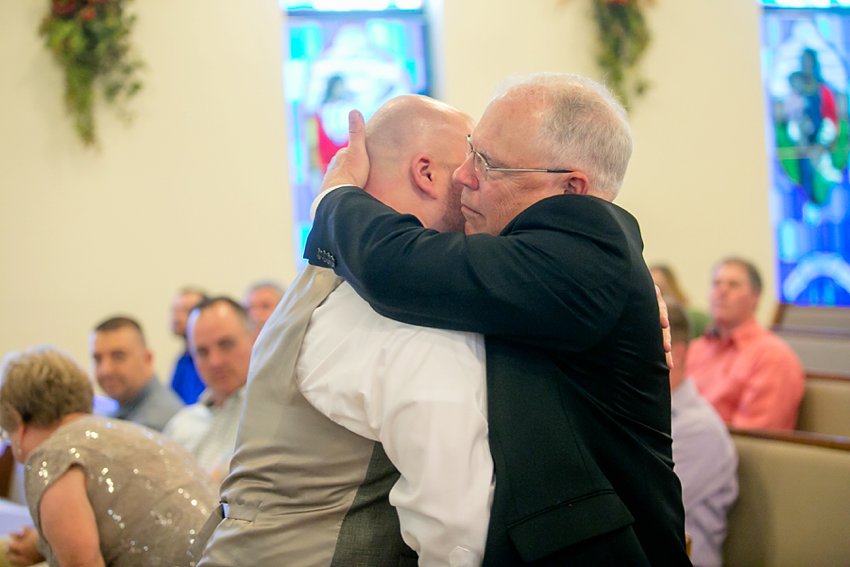 #4  – For the first time, Mr. and Mrs. MAYES!
This photo is one of my top five favorites. When Jeff saw this photo for the first time, his immediate response was “This photo COMPLETELY captures us as a couple!” He’s right. I’m the outgoing, sometimes loud, big personality. And Jeff is the calm/reserved one, looking at me like “yep, that’s my over-the-top wife!” Hahahaha! When Brandon, our officiant, pronounced us as husband and wife for the first time, THESE was our reactions. So true to form. Ha! Makes me smile every time. 😀 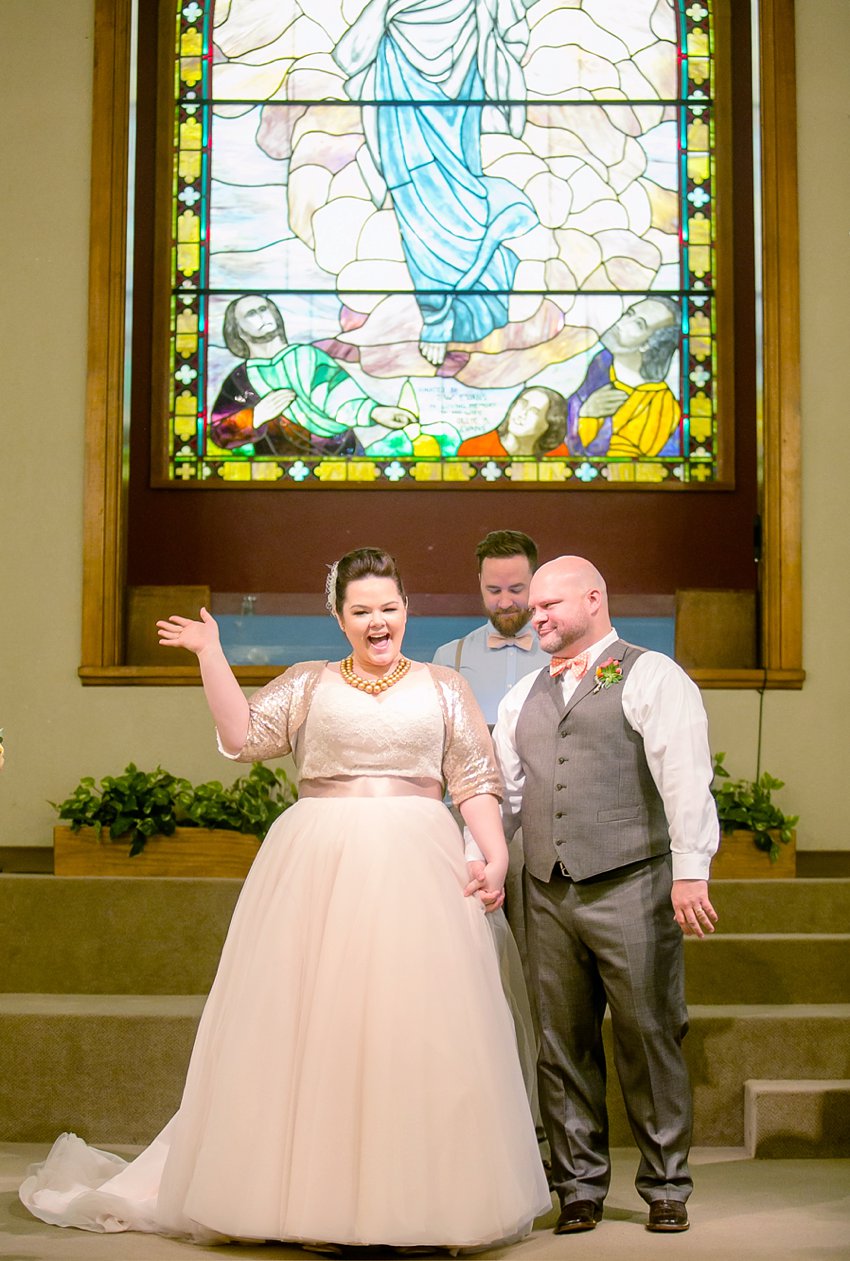 #5  – Right after the ceremony
I love this moment. We had just exited the church and our flower girl and ring bearer (our niece and nephew) were helping to carry my train. This moment is so perfect, it almost looks like it was posed. But nope. It’s 100% exactly what happened, and that’s why I love it so. 🙂 How funny is it that each “couple” is in almost exactly the same pose?

#6  – Right after the ceremony, part 2
These are 2 of my FAVORITE images from the entire day. MaKenna is my 11-year-old niece and was one of my bridesmaids (I explained how we chose our wedding party in part one.) She was the first person to predict that Jeff and I would get married, and she made me promise to tell her FIRST after we got engaged. I kept my promise (side note: Now she insists on being the first one to know when Jeff and I are pregnant. Ha!) She was more excited about our wedding that anyone. She was the last bridesmaid to exit the ceremony, and she immediately ran into my arms to congratulate us. I was SO excited to see that our photog captured this moment.

#7  – Mr. and Mrs!
This is one of my favorite images of Jeff and I together. I love the rustic background and the casual-but-kinda-classic pose. Jeff is about an inch shorter than I am (he purposely wore boots and I purposely wore flats to help “boost” him up to my height for our wedding. Ha!) This image makes me look shorter than he is, which I kinda like because that never happens. 🙂 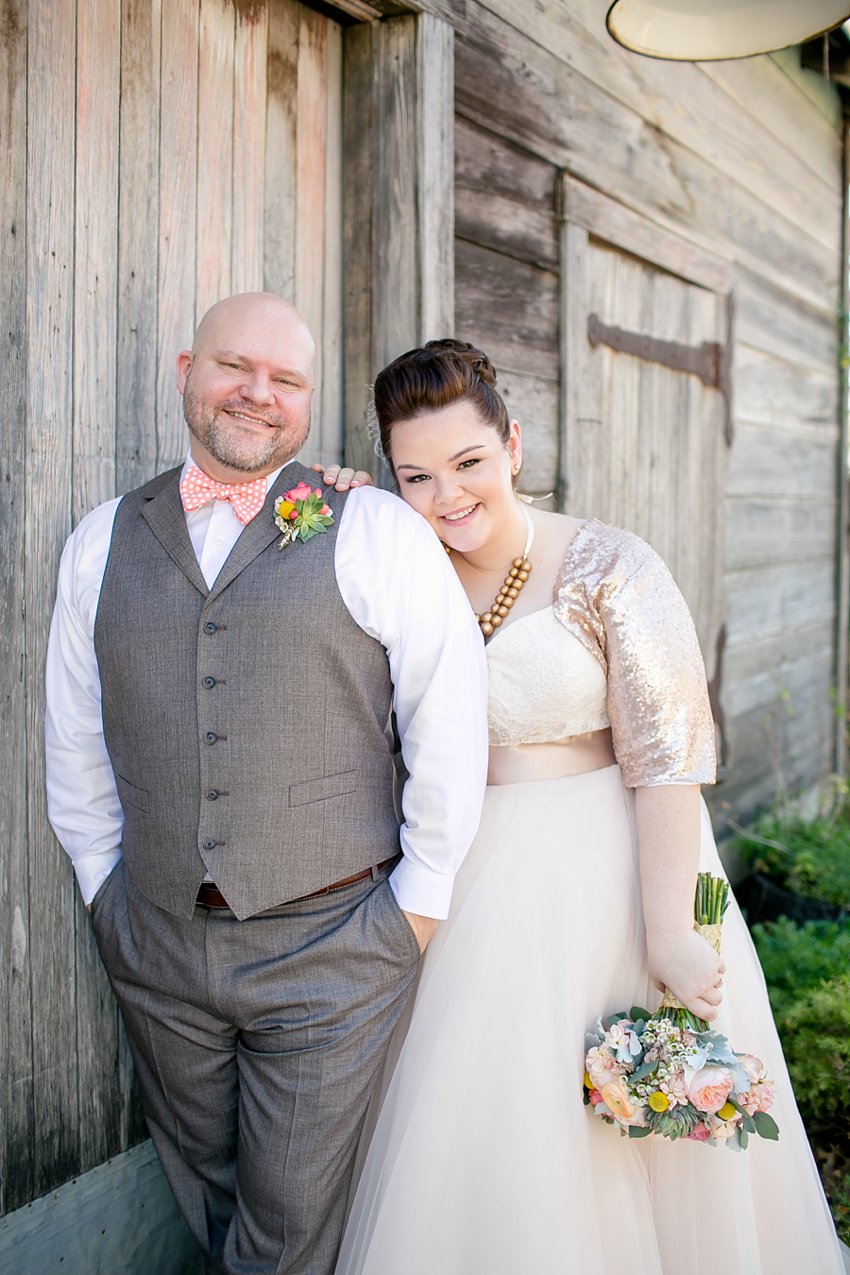 #8  – Mr. and Mrs!
Our photographers (The Nichols) found this arbor-walkway, and I’m so glad they did! How fun is this background? I love the image on the left because, for some reason, I’ve always loved the classic image where the bride/groom are perfectly posed, smiling at the camera. For me, it’s the image that makes me feel like we are actually MARRIED. My parents and grandparents both have a similar photo, and it was important to me to have one of my own.

#9  – Party time!
When I began to suspect that Jeff was going to propose, I began searching for little-known reception venues in Castroville. One night, I stumbled upon The Fiorella Event Center through another couples’ wedding website. I’d never heard of it before (it’s so little-known that they don’t even have a website). After some clever Google searching, I was able to find a handful of photos. I fell in love with the exposed brick and historic look of the building (turns out, the building has been around since the 1800’s… helloooooo character!) My mom and I secretly toured the venue before Jeff had officially asked me to marry him (minor detail). As soon as he proposed, I confessed that both venues had already been picked out. He wasn’t surprised. Ha! Like a good fiance, he went along with everything I’d chosen. 🙂 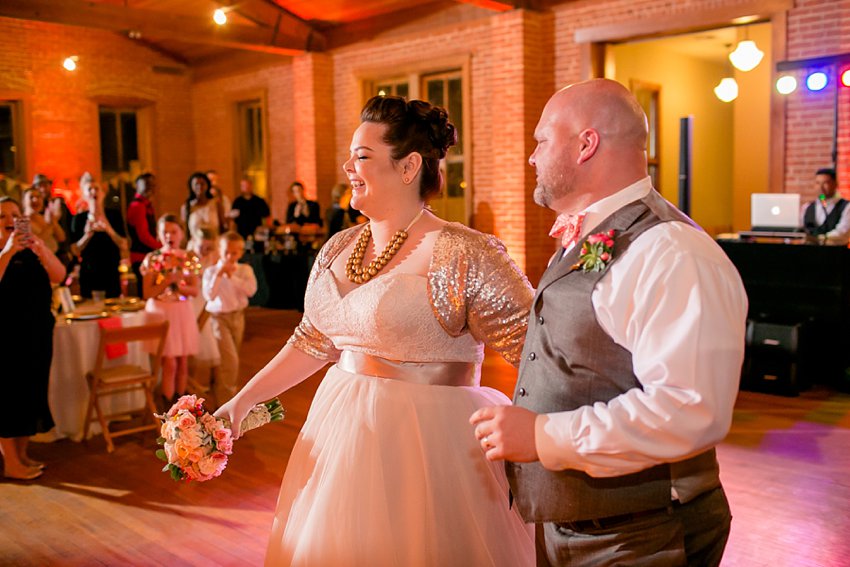 #10  – The Toasts (and the rap too)
Recognize that girl on the right? That’s Jenn. AKA my business partner (our lead photographer), my best friend, and my MOH. Turns out, Jenn is a pretty good rapper. She surprised Jeff and I with her own version of the Fresh Prince rap, and this image was captured at the very end of her “performance,” right before she dropped the mic. Ok, she didn’t REALLY drop it. But she should have. It was that good, y’all. The rap was one of the HIGHLIGHTS of our day, and we got it all on video. 🙂 I plan to share the full rap here in the next couple weeks, so stay tuned! 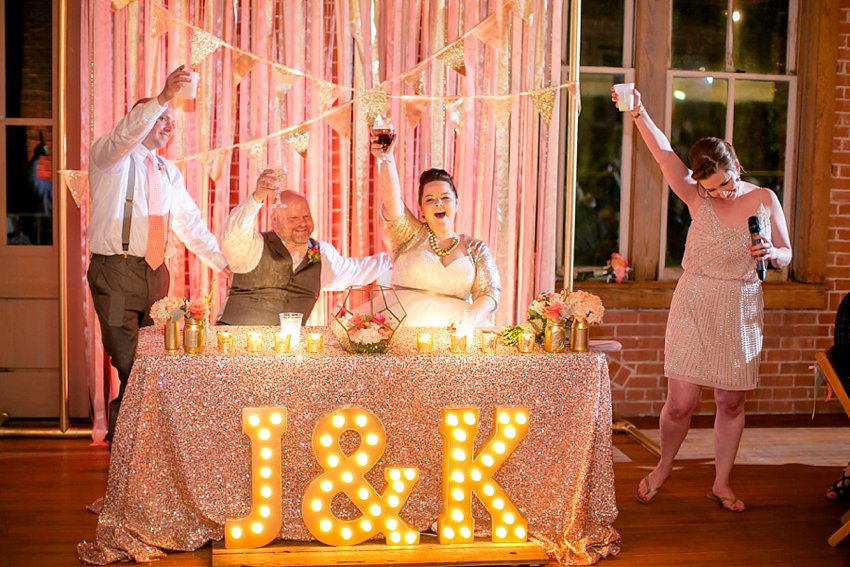 #11  – The dancing!
Ooooh, the dancing! It was the part that my nieces looked forward to the most. Every time I saw them, they wanted to “practice” their dancing… so we did. 🙂 We had several impromptu “dance parties” in the living room to get ready for the big day. Here we all are, showing off what we had practiced! We rocked it, if I don’t say so myself. 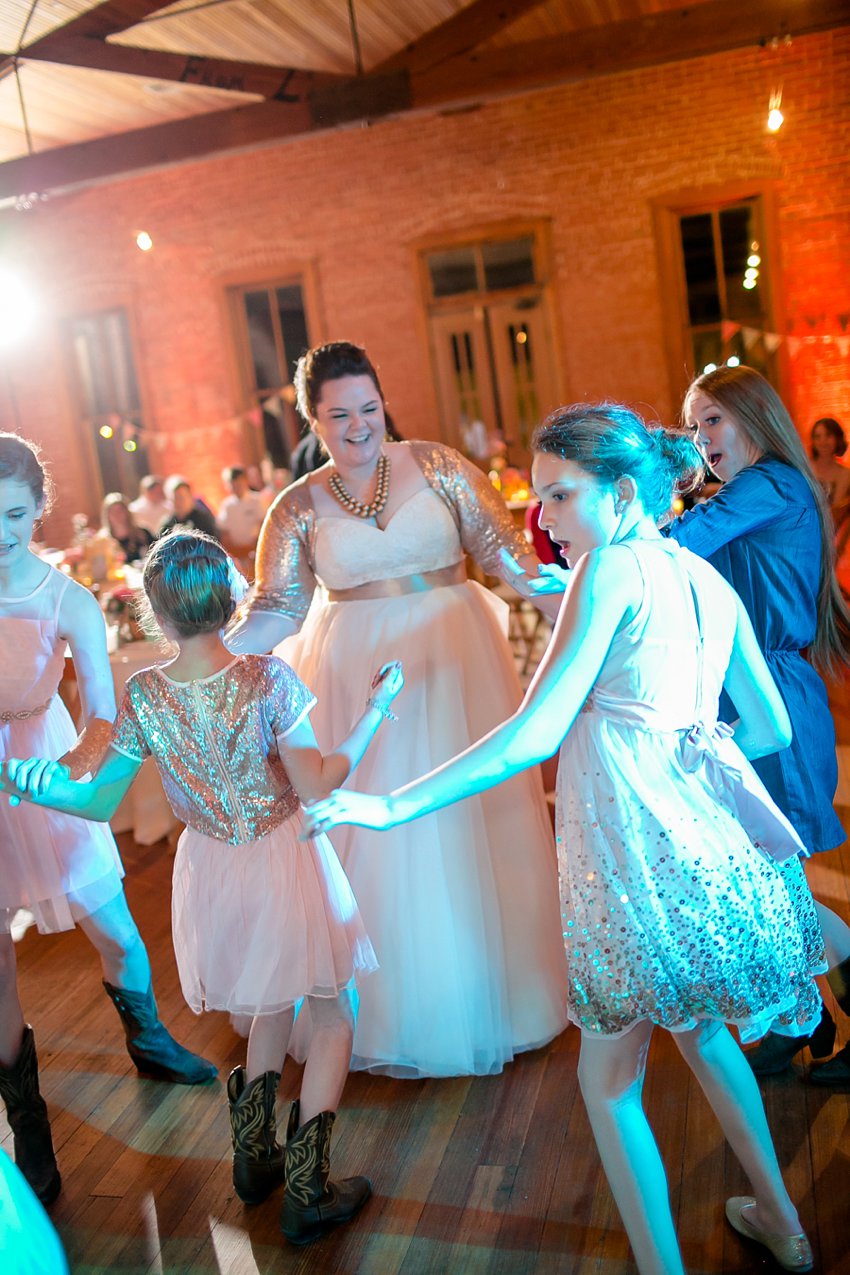 #12  – The exit!
This is one of my favorite photos from the day. We are surrounded by our friends and family and it shows just how HAPPY we really were! 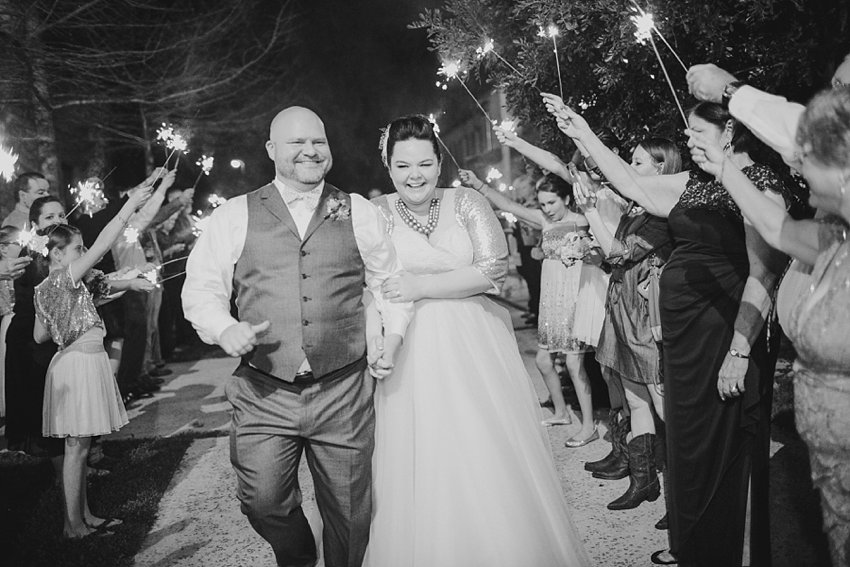 There you have it! My favorite images from our wedding (and why I love them!) If you made it this far, thanks for hanging in there and letting me share my day with you. We can’t wait to share in YOUR day and take beautiful images that you will be just as excited about!! 😀
-Kaylinn 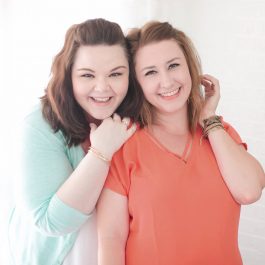 This is where the caption goes

The besties behind the blog

Lifelong BFFs and professional car dancers, there isn’t a Lizzo song we don’t know by heart. We believe in keeping it real, over-using emojis, and letting our hunky husbands do most of the cooking.

Our clients aren’t models, we just make them feel like they are with colorful images that are full of life (Double-chin hiding, pretty-light finding, and unlimited hand-holding always included.) We’re glad you’re here!

"What should I wear to my maternity session?" 👈

Next Post  Wedding at the Hyatt Hill Country Resort